Home News Time to Revisit Our Standard of Deprivation

Recently, on 1 July 2020, Word Bank announced that Indonesia has joined the rank of the group of upper-middle-income countries, from the previously lower-middle-income country group. As Indonesian income per capita has risen from $3,840 in 2018 to $4,050 in 2019, Indonesia passed that critical threshold. Our neighboring country, Malaysia, reached this status in 1992, while Thailand reached it in 2010.

Despite worth celebrating, we still have a long list of development outcomes that is still far from ideals in front of us, such as child malnutrition, inequality, and many others. Moreover, as we climb the ladder to become a member of wealthier income country-group, many of the standards we use for development progress may need to be changed. One of them is poverty.

Professor Amartya Sen of Cambridge and Harvard University, a globally renowned thinker and the recipient of economics Nobel prize in 1998 for his work on welfare and poverty, once said:

This basically implies that the poverty line, the standard we use to categorize people as poor or non-poor, is not a static concept. As confirmed with cross-country data, as income per capita of a country increases, their poverty line also increases.

This is consistent with the notion that Prof. Sen raised. The poverty line, is typically expressed in the country’s currency (such as Rupiahs) which is the amount of money needed to buy a basket of commodities that can fulfill our basic needs. Yet, what people and society see as basic needs may change. Precisely the same basket (or collection) of commodities we purchased 10 years ago may generate lower welfare or happiness today. Perhaps no one thought that transportation or internet connection was seen as basic necessities 20 years ago, but indeed they are now, for example. Borrowing Prof. Sen’s notion, we may use unchanged absolute welfare as the standard of poverty or deprivation, yet the composition of commodities that can generate the same amount of welfare naturally changes over time, especially when a country is getting richer.

The implication is clear. Failing to understand and anticipate these dynamics will make our progress of reducing poverty less meaningful. Reducing poverty is not merely reducing some numbers or a head-count index. Declining poverty should be consistent with declining deprivation, or declining the proportion of the population who are suffering from not being able to attain a certain level of well-being. Declining poverty incidences using our static standard of poverty certainly doesn’t meet this criteria.

In fact, if we take a look more carefully, the PPP conversion factor that the World Bank use is based on a survey carried out in 2011. It is updated every year, including using the general consumer’s price index (CPI). However, CPI may not necessarily represent the increase in the price of commodities that the poor typically buy. In fact, over the period of 2011 to 2018, the price of the commodities that the poor typically buy has increased much faster than the general CPI. If we take this into account, our poverty line in March 2018 is equivalent to $2.1 per person per day, which is pretty close to $1.9, the median poverty line of the low-income country group. This suggests that for a country with a per capita income of $4050, which now belongs to the wealthier group of the upper-middle-income country, we have a sub-standard definition of how to define deprivation.

So, is it the time to revisit our official poverty line? Yes, and it is urgent. Not only our trend of declining poverty must reflect the trend of declining incidence of real deprivation, but our democracy also needs a better yardstick. Democracy provides a room for a competition to find good leaders, from local, regional, and national democratic arena, that can deliver the real development progress while they are in office. Reducing poverty is of course, among the utmost important development goals that these leaders should aspire to. It is unfortunate if these potentially good leaders are tested using the standard that is only relevant for low-income countries where, according to our income per capita, it is not where we belong. 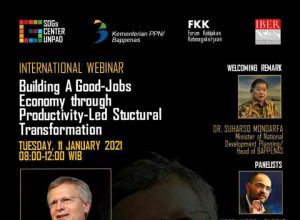 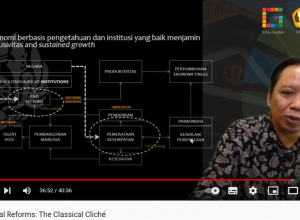